Retail sales rose by 0.8% in December, year-on-year, according to the Retail Economics Retail Sales Index (value, non-seasonally adjusted, exc. Fuel). Christmas spending in 2020 was like no other. November’s national lockdown and tiered restrictions throughout December disrupted the traditional timing of consumer spending while also affecting the distribution between channels and retailers. Given the blow to the economy, the devastating impact Covid19 has uprooted societal norms, and the cloud of uncertainty still hangs over people’s futures, these results surpassed our expectations. The impact of the pandemic has widened the gap between the most and least… subscribe or take out a free trial to read more.

The BRC-KPMG measure reported total sales rising by 1.8% in December, year-on-year, driven by growth of non-food online which rose by 44.8% on the previous year and accounted for 47.8% of non-food sales. The BRC also reported like-for-like sales rising by 4.8% (note: this excludes the temporary closure of stores but includes online sales).

The ONS retail sales index reported a fall in sales of 0.3% in December (value and non-seasonally adjusted – exc. Fuel). Growth was dragged lower by the inextricably weak performance across food retailers which reported a sales rise of just 0.8% (value and non-seasonally adjusted). Despite the closure of restaurants, cafes and bars across most of the country, the ONS reported that sales for large food retailers actually fell by… subscribe or take out a free trial to read more.

The ONS retail sales index reported a fall in sales of 0.3% in December (value and non-seasonally adjusted – exc. Fuel). However, there was a large divergence in the performance between large retailers (-3.3%) and small retailers (+11.6%). This is mainly due to the impact of the 53-week year in 2020 which means that trading periods are mis-aligned by one week compared with… subscribe or take out a free trial to read more.

Online sales rose by 45.8% (value, non-seasonally adjusted) on the previous year, accounting for 31.3% of retail sales in December (value and non-seasonally adjusted). Online food remained in strong demand with sales rising by 92.5% on the previous year. Online Non-food (+62.9%) also saw strong growth helped by the performance of department stores which rose by 90.5%. Non-store retailing, which is driven by pure online retailers, rose by 25.1%.

Retail sales increased by 1.8% on a total basis in December according to the BRC-KPMG Retail Sales Monitor (RSM), slipping below the three-month growth rate as restrictions hit store sales during peak trading. Excluding temporary store closures and including online sales, like-for-like sales (LFLs) rose by 4.8%.

Sales volumes improved in the year to December (-3%) from the 25% decline in the previous month, according to the latest CBI Distributive Trades Survey. Retailers expect sales volumes to worsen (-33%) in the year to January. Orders placed on suppliers recorded a balance of -4%, from -10% in November, the least negative balance in 14 months. Orders are expected to fall again next… subscribe or take out a free trial to read more.

Total like-for-like (LFL) sales contracted by 1.6% in December on a yearly basis, following two consecutive months of growth. This compares to a strong base of +6.6% a year ago. However, total non-store LFLs increased by a punchy +62.0% in December.

The Coffer-Peach Tracker monitors sales for the UK Pub and Restaurant sector, collecting and analysing monthly performance data from 51 operating groups. Total sales remained firmly in negative territory in December, impacted by tighter restrictions as cases of the coronavirus rose. Indeed, total sales fell by… subscribe or take out a free trial to read more.

Polarised performance of online and store-based sales (Nov/Dec 2020 vs. Nov/Dec 2019) 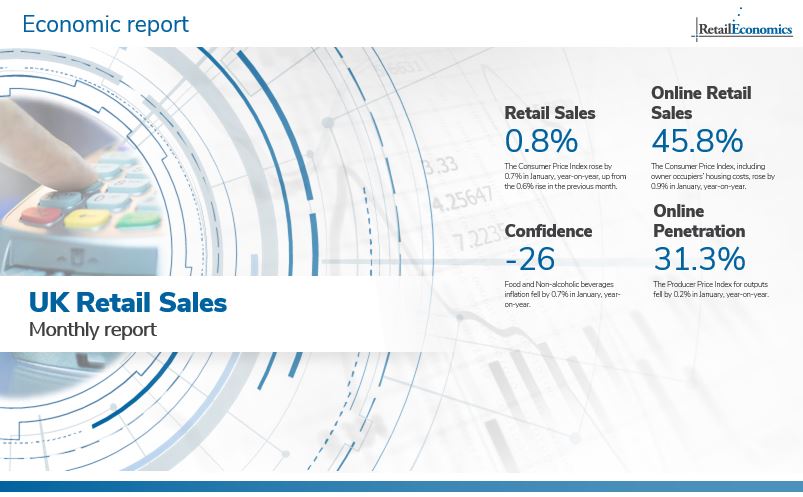